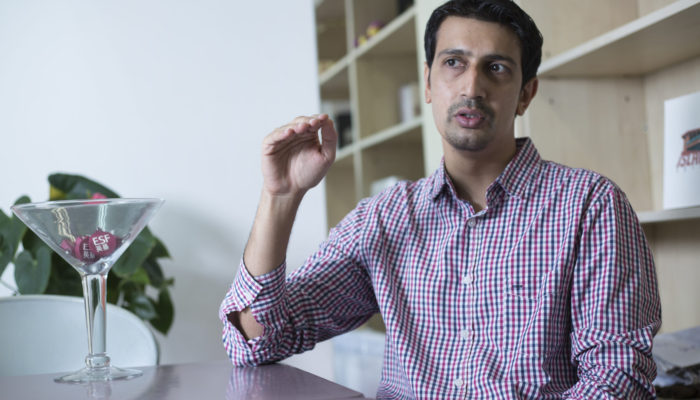 Getting started with start-ups

Mohammed “Mo” Abdoolcarim still finds it amusing how, more than 20 years ago, he built a functioning landline telephone from scratch in his design and communication class at Island School.

Fifteen years later, he would participate in the development of another life-changing phone – the Apple iPhone 4S.

Mo recalls in an interview with ESF Alumni News. Back then, Siri was still just a web-based prototype called “MobileHow”.

“We all believed in the vision of Siri eventually becoming the ‘Google of the phone’. Just like Ocean’s 11, we believed we were on this impossible mission, like robbing a casino or something as crazy like it, that was probably going to fail.”

But fail it did not. Life was about to change for Siri Inc’s employees.

It all started with a sit-down in 2010. “We were told to be in the meeting room at a certain time. We were not allowed to bring our phones. That’s when I knew something was up.

“I made a joke to my colleague about how it would be so funny if Bill Gates and Steve Jobs came in and said ‘hey, we’re joining Siri.”

A few minutes later, the late Apple co-founder Steve Jobs and then executive Scott Forstall were standing in the conference room of their tiny San Jose office, getting ready to break the news. For 24 hours, they had to keep the news secret as two other companies had been courting the company. A leak within that the timeframe could have brought legal troubles.

Apple ended up acquiring Siri for a cool US$250 million. She was launched with the iPhone 4S in October 2011, setting the wheels in motion for a mobile voice assistant revolution.

Siri is now programmed into nearly all Apple’s products. It did not take long for Amazon, Microsoft, Google and Samsung to come up with their own virtual assistants.

“No one expected Apple to buy us or that we’d be on every iPhone in the world. But I felt it was worth giving a shot. That’s what start-ups are about. Trying and giving something a chance.”

A venture into education

Mo has since left Siri, but the priceless Silicon Valley education has helped him pave his own way into entrepreneurship and innovation.

In 2016, he co-founded Vahan. Based in Singapore, the start- up is building a Whatsapp-based virtual companion to teach blue-collar workers across South and Southeast Asia practical English language skills and etiquette that can be used in social and work settings.

“We were looking at schools in India and Southeast Asia and we found that teachers were overloaded [with work]. We wanted to build a product that could help teachers teach larger classes and also, to help students get jobs,” explains Mo.

Mo’s foray into education can be traced back to his secondary school days at Island School when he joined the Summerbridge programme as a mentor. The organisation provides educational opportunities for secondary school students whose first language is not English.

“I never really knew what I wanted to do growing up. But I knew I liked design and science. After I took Summerbridge, it really changed my mind about the role educators play because you can see the impact they have on people immediately.”

With technology rapidly changing the way people live and conduct business and social relations, his advice to youngsters is to try classes in different fields and to not shirk away from new things. He is a staunch proponent of “cross-functional education”.

“You never know what the future is going to hold because things are changing so much. Look at how technology is changing the field of finance (fintech), transportation (car sharing) and healthcare (biosensors),”

“People used to think maybe being a doctor must be pretty straightforward. But nowadays you can combine being a doctor with engineering or with biology in biotech and genetics.

Having some understanding of engineering certainly helps, as it will be a common denominator behind any cutting-edge product or service, he adds. “You don’t have to be a career engineer, but it gives you an understanding of how the world works and not to fear changing things.”

“If you’re a doctor, do some engineering. Who knows what kinds of new technologies you can build to save people. Teachers as well, you can combine education with engineering to design better courses.”

Vahan is still being developed. But like Siri and other start-ups he worked with, Mo has no idea if it will work – the unofficial Silicon Valley mantra after all, is “fail fast, fail often”. Nevertheless, he is a believer in the scientific method.

Mo has always been an experimentalist, a believer in the cutting-edge, even as a kid. Part of it may have had to do with his upbringing by “not typical Indian parents” who let him and his sister (now pursuing a doctorate in photography) pursue the interests they enjoyed, play the sports they liked and pursue whatever piqued their the interest.

“This definitely contributed to giving us space to find out what we like. For that reason, we ended up choosing creative fields, fields which we didn’t even know if there were careers available but we just did it,” he says.